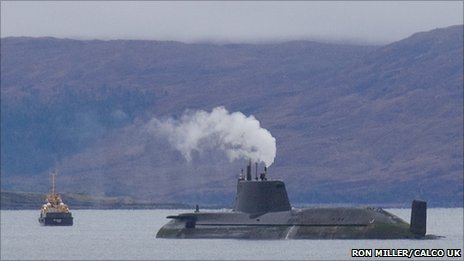 The Royal Navy's newest and largest attack submarine HMS Astute has run aground off Skye, the Ministry of Defence (MoD) has confirmed.

An eye-witness said the sub - described as the stealthiest ever built in the UK - appeared to have grounded.

A Ministry of Defence spokeswoman said: "This is not a nuclear incident.

"We are responding to the incident and can confirm that there are no injuries to personnel and the submarine remains watertight."

The spokeswoman added: "There is no indication of any environmental impact."

The Maritime and Coastguard Agency (MCA) was alerted to the incident at about 0819 BST and confirmed it had grounded.

A spokesman said: "We have sent a coastguard tug to where the submarine ran aground on rocks at the Kyle of Lochalsh near the Skye bridge.

"It will stand by and monitor what will be going on. We think on the rising tide, at around 1800 BST, there should be some movement of the vessel."

A Royal Navy helicopter has also been at the scene. 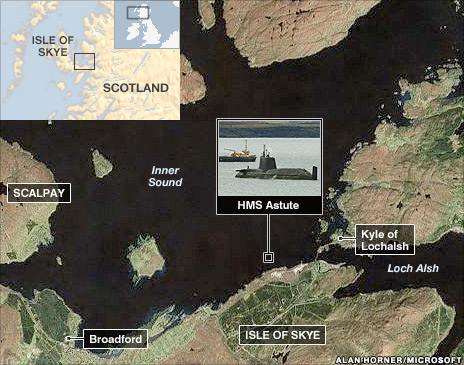 Eye-witness Ross McKerlich said the submarine was about a mile from his home and appeared slightly tilted.

He said: "When I woke up this morning and looked out my bedroom window I could see the submarine.

"I am very surprised how far in it has come as there are good navigational buoys there."

Mr McKerlich added: "There was a helicopter hovering over the top - it's now gone back and there are two Naval vessels from the local base, Kyle of Lochalsh, standing off to the north of her. 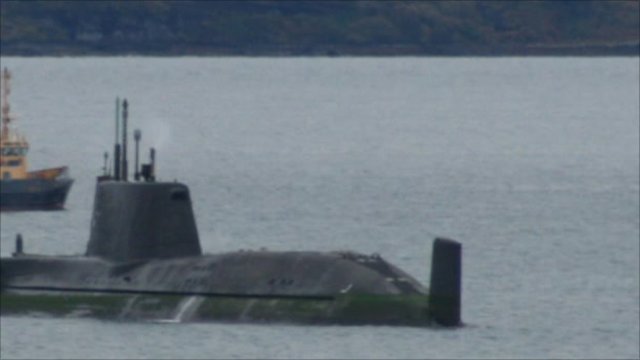 "Earlier in the day they did have ropes and they were trying to tow but now the tide has gone back and they're just standing off."

Martin Douglas, a former nuclear submarine engineer, said a concern for the crew was the provision of sea water to the boat's reactor.

He said: "The sea provides the primary cooling for the reactor system.

"There are many, many levels of back up systems, but they may have to find some interesting ways of getting sea water supply to the reactor."

Mr Douglas said the skipper and crew were highly trained to deal with extreme situations.

But he added that as the tide dropped more HMS Astute would be on display and secrets of its propulsion revealed.

HMS Astute, built by BAE Systems in Barrow in Furness, Cumbria, is believed to have been undergoing sea trials as it is not expected to enter service until next year.

A look around the Astute's control room

Aside from attack capabilities, it is able to sit in waters off the coast undetected, delivering the UK's special forces where needed or even listening to mobile phone conversations.

The 39,000 acoustic panels which cover its surface mask its sonar signature, meaning it can sneak up on enemy warships and submarines alike, or lurk unseen and unheard at depth.

The submarine can carry a mix of up to 38 Spearfish heavyweight torpedoes and Tomahawk Land Attack Cruise missiles, able to target enemy submarines, surface ships and land targets, while its sonar system has a range of 3,000 nautical miles.

Speaking to the BBC last month, HMS Astute's commanding officer, Commander Andy Coles, said: "We have a brand new method of controlling the submarine, which is by platform management system, rather than the old conventional way of doing everything of using your hands.

"This is all fly-by-wire technology including only an auto pilot rather than a steering column."

Submarine HMS Trafalgar sustained millions of pounds worth of damage when it ran aground off Skye in 2002.

Two senior commanders were reprimanded after admitting that their negligence caused the incident.

The sea around Skye and the island of Raasay is used as a training ground for the Royal Navy.