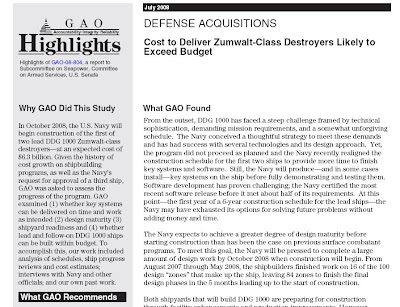 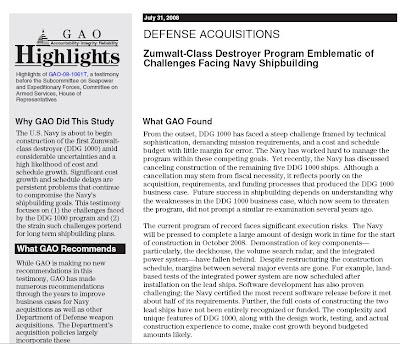 Oto Melara has managed to hold on to its position as the exclusive supplier of naval gun mounts to the Royal Netherlands Navy. Yesterday, the company (part of Finmeccanica) signed contracts for the supply of four 30-mm. Marlin weapon systems and eight 12.7-mm. Hitrole naval turrets to be installed on the four new Patrol Ships for the service.

According to a announcement made by Oto Melara this morning, the contracts result from an international bid process which started in July 2007.

Each of the four new 3,750-metric-ton Patrol Ships to be built for the Dutch navy will be armed with a 76-mm. gun mount, a 30-mm. gun mount, and two 12.7-mm. machine gun mounts, all remotely controlled from the ship's combat information center and all supplied by Oto Melara. Image: Thales

In response to "stringent requirements of emerging warfare," the 30-mm. Marlin and 12.7-mm. Hitrole NT have been conceived to operate in synergy with other components of the ship's combat system, says Oto Melara.

The total value of the two contracts is more than 12 million euros ($18.6 million) including technical assistance and a first batch of spare parts.

Deliveries are to be completed by 2011.

The newly-ordered mounts will not be the only Oto Melara weapons systems on the new patrol ships: their main armament will be Oto Melara's ubiquitous 76-mm. naval gun mount. However, the Dutch are acquiring these second-hand from the Danish navy.

The 76-mm. gun is also the main gun on the Dutch navy's two remaining M-class frigates (six of which have sold to Belgium, Chile and Portugal) while the four newly-delivered LCF-class frigates have Oto's 127-mm. Compatto gun mount as the primary gun system.

For these last gun systems, Oto Melara is working with the Dutch and Italian navies to develop the new Vulcano family of extended-range, precision-guided 127-mm. (5-inch) munitions. This should enable warships armed with 127-mm. guns to engage precision targets over 100 km inland.

We won't diminish the fine reputation of the individual who sent us these photos, but that person doesn't work for Lockheed Martin in case you are wondering.

However, because these pictures have been made available by Lockheed Martin and Marinette Marine, we will give proper credit to Lockheed Martin and Marinette Marine for an excellent job with the PR here. I think I speak for everyone when I say it will be a good day when this ship finally gets to sea, and no we are not talking about the Great Lakes. 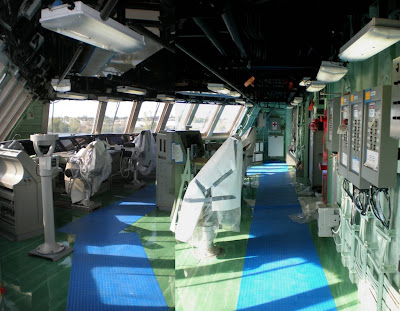 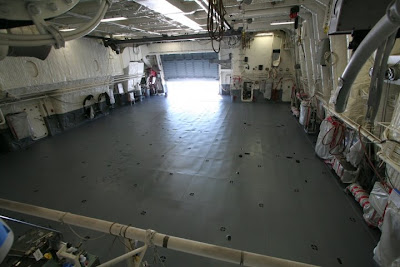 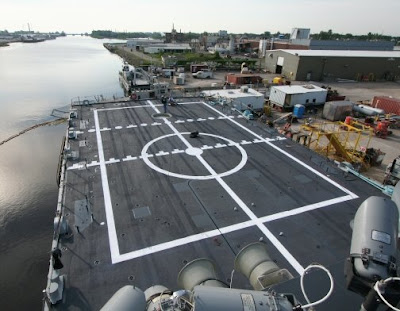 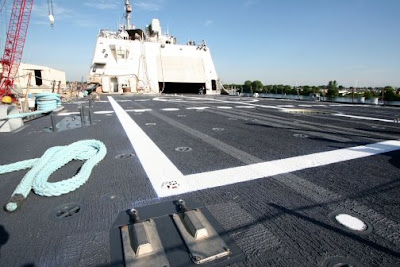 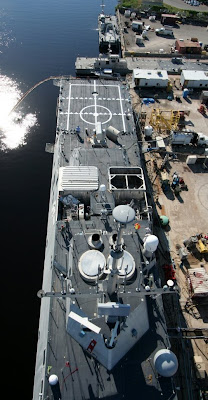 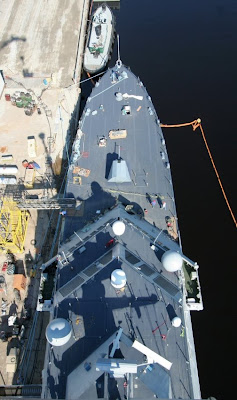 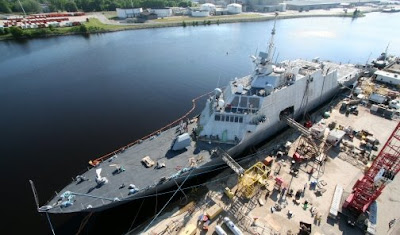 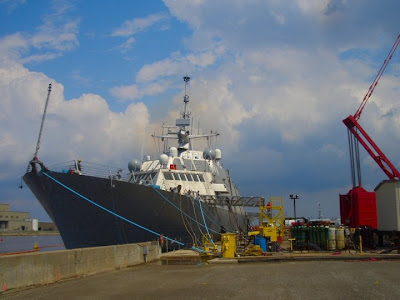 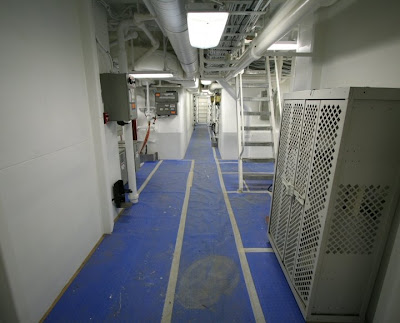 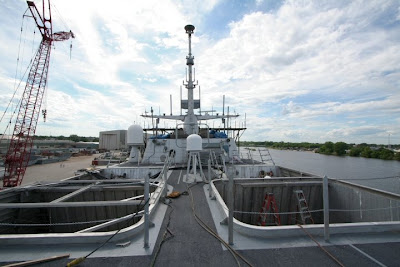 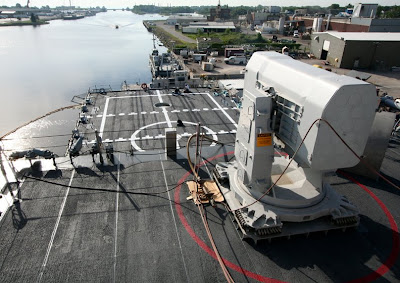 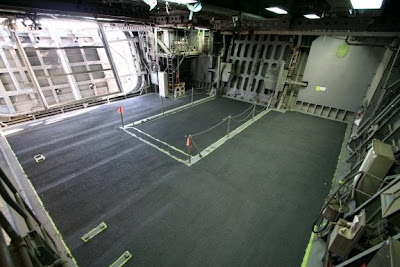 Click the images for a better view, most are larger than what you see here. There are a lot of things to like about this ship. For us, Freedom is to motherships what the Langley was to aircraft carriers, in other words not quite the right platform but one way to execute the right idea.
Postado por NOTICIASNAVAIS às 16:17 Links para esta postagem

We won't diminish the fine reputation of the individual who sent us these photos, but that person doesn't work for Lockheed Martin in case you are wondering.

However, because these pictures have been made available by Lockheed Martin and Marinette Marine, we will give proper credit to Lockheed Martin and Marinette Marine for an excellent job with the PR here. I think I speak for everyone when I say it will be a good day when this ship finally gets to sea, and no we are not talking about the Great Lakes.

Click the images for a better view, most are larger than what you see here. There are a lot of things to like about this ship. For us, Freedom is to motherships what the Langley was to aircraft carriers, in other words not quite the right platform but one way to execute the right idea.
Postado por NOTICIASNAVAIS às 16:17 Links para esta postagem

Following his October 2006 meeting with French President Nicolas Sarkozy, Bulgarian Prime Minister Sergei Stanishev initially gave the go-ahead for negotiations to buy 4 Gowind corvettes. A French-Bulgarian working group was then set up to finalize the estimated EUR 900 million (then about $1.25 billion) contract before the end of 2007, but Bulgaria subsequently backed out, saying that it could not afford the contract. Instead, in December 2007 the Bulgarian navy spent EUR 54 million on a pair of used frigates and a minesweeping vessel from Belgium.

Still, one should never underestimate the power of diplomacy. A July 2008 trip by President Sarkozy appears to have snatched victory from the jaws of defeat.

Gowind is designed to deploy Unmanned Surface Vehicles (USVs) and Underwater Unmanned Vehicles (UUVs), though it lacks the full mission module system in Denmark’s Standard Flex 300 corvettes or the USA’s Littoral Combat ships. An aft deck has been provided allowing for up to 10-ton class helicopters, or even Unmanned Aerial Vehicle (UAV) launch. The weapon system builds around a Setis combat system with a multi-functional radar, and 16 vertical-launch cells for Aster 15 or Mica-VL anti-air missiles. It can also be armed with 8 MM40 Exocet or Harpoon anti-ship missiles, and carries a naval gun.

Gowind corvettes are shaped for stealth, with a single central mast that replaces several sensor masts in other ships, and provides both improved signature and a 360-degree view for radars and other sensors. The ship’s propulsion system is based on Combined Diesel and Diesel (CODAD) but has no gas exhaust chimney, channeling it into the water-jets to create maneuverability in shallow waters, high-speed performance, improved infared signature, and improved visibility for its top-mounted sensors.

The ships come in several sizes. Gowind-200 ships arfe distinguished from the Gowind-120 and -170 ships by their larger size, which allows them to carry a suite of anti-submarine warfare equipment in addition to their other armament.

The Gowind corvette deal may have wider ramifications for Bulgaria than the role it will play in that country’s military modernization. There are reports that only the first ship will be built in Lorienne, with the other 3 built in Varna by Bulyard Shipbuilding Industry, and equipment installed by the Bulgarian ship repairing yard Terem-KRZ Flotski Arsena. Dozens of Bulgarian engineers and technicians would need be trained in France as part of these arrangements, and French unions have already expressed concerns that outsourcing to Bulgaria’s cheaper shipyards may become permanent build locations as DCNS works to sell these ships abroad.

DCNS group Executive Vice President & COO Bernard Planchais alluded to these possibilities as he said in the Oct 5/07 corporate release that:

“In addition, achieving this major milestone opens up new business opportunities for this type of vessel on the expanding global market as navies around the world seek to modernise their fleets. Cooperation with Bulgaria is a key factor as we pursue development with new client countries, particularly in Eastern Europe.”

July 18/08: Belgium has concluded the sale of 3 navy vessels to Bulgaria. Some administrative paperwork still has to be finalized.

July 14/08: French ambassador to Bulgaria Etienne de Poncins reveals that DCNS/Armaris has applied for the privatization of the Bulgarian Defence Ministry’s Terem – KRZ Naval Arsenal shipyard in Varna. The Varna factory is one of 4 factories considered strategic for the state so only 66% of it will be sold.

Rumors place the level of investment in the shipyard at EUR 500 million if DCNS succeeds. The French shipbuilder plans to build one of Bulgaria’s Gowind Class frigates at Varna, and would like to make the shipyard a future repair center. Sofia Echo | Sofia News Agency | Focus News, Bulgaria.

July 4/08: Never underestimate the power of diplomacy. Despite previous refusals to re-open the issue, Bulgaria has provisionally agreed to buy 2 Gowind corvettes instead of 4, in an order estimated at EUR 400 – 450 million. The decision comes during a visit by French President Sarkozy that includes the signing of a wider strategic partnership between the 2 nations. Alex Bivol of the Sofia Echo draws a second connection, however: the impending EC report re: Bulgarian progress in tackling organized crime, and over EUR 500 million in frozen EC funding to Bulgaria. Sofia Echo report | Focus News, Bulgaria | Reuters.

Dec 7/07: Bulgaria decides that it cannot afford the Gowind Class, despite promises of 100% industrial offsets to the Varna shipyard and reports that the price had been lowered to EUR 780 million. Bulgaria’s defence minister Vesselin Bliznakov announces that instead, Bulgaria will buy 3 upgraded ships from Belgium for only EUR 54 million, payable over 8 years. The ships are 2 frigates (almost certainly the Wielingen and the Westdiep, both commissioned in January 1978), and the M992 Myosotis minesweeper of the Tripartite Class. Bulgaria already operates an upgraded second-hand Wielingen Class frigate from Belgium, after buying it for EUR 23 million and renaming it from Wandelaar to Drazki (Intrepid). Read “Bulgarian Corvette Deal Sunk By Second-Hand Frigates.”

Thursday, July 24, 2008
GE Marine announced that it will supply the Spanish shipbuilder, Navantia, Madrid, with two LM2500 aeroderivative gas turbines. The LM2500s will power two new Royal Australian Navy (RAN) Landing Helicopter Dock (LHD) amphibious ships.
In February 2007, Navantia and Australia’s Tenix Group announced the two companies will jointly construct the two new LHD vessels. Navantia will oversee the ships’ design and construction, power plants and platform control system. The Tenix Group will handle the construction of the superstructure and the bulk of the fit-out at its Melbourne facility.
The two Canberra-class LHD ships – to be named HMAS Canberra and HMAS Adelaide – will rely on one LM2500 gas turbine in a COmbined Diesel Electric And Gas turbine (CODLAG) configuration with diesel engines. The new LHD ships are expected to carry 1,000 personnel, six helicopters and 150 vehicles, and replace both HMAS Manoora and HMAS Kanimbla.
GE will manufacture the=2 0LM2500 gas turbines at its Evendale facility, and will deliver the gas turbine-generator sets in August 2009 and November 2010. The RAN is slated to launch the first LHD in March 2009, with commissioning in January 2013. The second LHD will be launched in October 2010, with commissioning to follow in June 2014.
Postado por NOTICIASNAVAIS às 20:34 Links para esta postagem