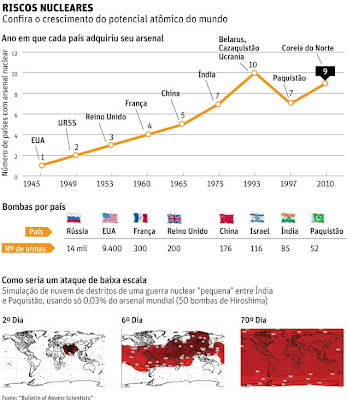 Author, "Revolution! South America and the Rise of the New Left"

Having endured repression under the 1964-1985 right wing military dictatorship, many Brazilians hold the nation's defense establishment in low regard. Indeed, because of the awful stigma associated with this dark era of Brazilian history, few politicians will admit to being on the right, even if they hold conservative beliefs. Yet, recent U.S. cables released by whistle-blowing outfit WikiLeaks suggest that Brazil has undergone a psychological shift and is once again intent upon building up its military. There may come a time when the Brazilian armed forces, and not the U.S. military, calls the shots in the immediate neighborhood as Brasilia seeks to flex its muscle.
Today, the Brazilian armed forces are rethinking their wider role in society. While the military will continue to focus on maintaining internal stability, fighting domestic crime and contributing forces to international peace keeping missions, the defense establishment has grown increasingly concerned with border defense. "Moreover," notes U.S. ambassador in Brasilia Clifford Sobel, "they [Brazilians] continue to hold suspicions regarding the intentions of the international community--including the United States --with regard to the Amazon. Brazil sees a strong military as an important element in backing up these assertions of sovereignty over the Amazon."
According to Sobel, Brazil is primarily focused on its "rightful" place on the regional and world stage and such concerns will "remain [the] central, and perhaps overriding motivations for the government." Many in the military and civil society, meanwhile, believe that the United States "has nefarious designs on the Amazon." "Fortunately," the ambassador added, "the rabid ultra-nationalists are in the minority, but this issue will never die as the famous internet hoax about a supposed U.S. social studies textbook which shows a map of the Amazon overlaid with the words 'International Territory' continues to make the rounds every couple of years."

From Arms Shows to Nuclear Submarines

In a sign of the times, former president Lula himself assigned top priority to defense. When the Brazilian Defense Minister traveled abroad to France and Russia to negotiate arms ties, he was joined by a whole host of top level officials such as Brazil's presidential foreign policy advisor, the Secretary General of the Ministry of Foreign Affairs, and the Long Term Planning Minister. The U.S. ambassador informed Washington that the Lula government wanted to purchase nuclear submarines and to increase Brazil's "domestic manufacturing capability for weapons via technology transfer." Eventually, Sobel added, Brazil sought to rebuild its military capacity, including fighter aircraft, and to develop "a new, more structured organization of South American defense ministers."
Brazil's military rise has been meteoric, and judging from cables the U.S. is sitting up and taking notice. In May, 2009 U.S. Chargé d'Affaires in Brasilia Lisa Kubiske wrote her superiors about a vast Latin American Aerospace and Defense show held in Rio de Janeiro. The show featured more than 100 exhibitors showcasing aerospace, defense and security products, and the event itself was much larger than previous exhibits. "The major reason for the increased interest," Kubiske wrote, "was the perception that Brazil, the region's largest economy, will be increasing defense spending as it modernizes its armed forces. Brazilian exhibitors occupied approximately twenty percent of the exhibit space, promoting sales of vehicles, aircraft, weapons and ammunition. Both President Lula and Defense Minister Jobim made it a priority of their visits to [the exhibit] to highlight the Brazilian exhibitors."
Though labor organizer Lula was originally an opponent of the military as well as the nuclear power industry, the Brazilian president has come out for funding of a nuclear submarine. "While serious questions exist as to the proposed vessel's military utility and affrodability," Sobel noted, "it enjoys strong support both for reasons of perceived national prestige and for its possible benefits to Brazil's nuclear power industry." Making headlines in the Brazilian media, Defense Minister Jobim announced that Brazil needed a submarine to protect recent offshore oil discoveries.
Writing to his superiors, Sobel was skeptical of such claims. "Even if a threat to the oil fields existed," the ambassador wrote, "it could be met more effectively, and economically, by conventional vessels. In reality, a nuclear submarine would not improve Brazil's security apart from a dubious boost to national machismo." Lula himself however came to the support of his minister, and was quoted as saying "I think we would be more highly valued as a nation (with a nuclear submarine)."

What are the larger regional implications of Brazil's rising military might? Like the U.S., Brazil is now developing its own military-industrial complex. Take for example aerospace giant Embraer, which exercises comparable political leverage to Boeing or other companies in the U.S. Writing to his superiors in Washington, Sobel remarked "as Brazil's economy and technological base keep growing, so will its role as an exporter of military items. Both President Lula and Defense Minister Jobim have stated that developing strong defense industries that thrive on exports will enhance Brazil's security. It is therefore probable that governments and non-government actors seeking access to military technology will increasingly turn to Brazil."
But if Brazil starts to throw its weight around and becomes a leading arms exporter could the South American nation come to be reviled in the eyes of many within the wider region? High level officials within the Lula administration seemed resigned to such a possibility. Speaking with U.S. diplomats, Brazilian ambassador to Bolivia Marcel Biato remarked that "the United States will have to accept a certain level of discomfort" in terms of its relations with Bolivia, Ecuador and Venezuela. Biato added that "both Brazil and the United States are in similar situation, in that there is anti-Americanism and a growing anti-Brazilianism in these countries."
Perhaps even more seriously, Brazil could suffer actual blowback. As the U.S. has discovered to its chagrin, shipping arms to countries far and wide can have unintended consequences. Now that Brazil is becoming a substantial player in its own neck of the woods, the South American powerhouse might encounter similar problems. In 2005, the Lula administration gave the go ahead to Brazilian aerospace company Embraer to sell twenty Super Tucano airplanes to Venezuela. In the event, the Bush administration protested and argued that leftist Venezuelan president Hugo Chávez was a menace. Since U.S. suppliers provided 50 percent of the components of the Super Tucano, Washington was able to eventually block the advance of the sale.
The Lula administration was furious, claiming that the U.S. had unfairly sought to halt the growth of Brazil's own domestic arms industry. The only way to contain Chávez and gain some leverage, Brazilian officials argued, was to provide the Venezuelan with arms sales. It is here, however, that Brazil could very well fall into a trap of its own making. By promoting arms purchases throughout the region, Brazil may wind up escalating tensions in the immediate neighborhood. Ironically, U.S. cables hint that even as Brazil sought to build up its incipient arms industry and boost weapons sales, the country also feared that Venezuela might seek to carve out a larger sphere of influence.
"Venezuela," wrote the Americans, "has now become the central focus of Brazil's regional stability concerns," and experts "regularly and publicly express general concerns about Chávez's destabilizing influence on Bolivia and Ecuador, as well as his troubled relationship with Colombia." In private discussions, respected members of the Brazilian foreign policy elite voiced concern that "Venezuela under Chávez could well make a military effort to reclaim the half of Guyana (west of the Essequibo River) that it considers lost territory, principally as a way to deflect public attention from domestic woes."

The U.S. Must Act Now to Head off Brazil

For the time being, the U.S. and Brazil enjoy friendly military and diplomatic ties. However, according to Sobel "many of Brazil's political leaders remain uncomfortable with the idea of a close security relationship with the U.S. and believe France would be a better strategic partner." In addition, writes the ambassador, the U.S. announcement in April, 2008 that it would reactivate its Fourth Fleet "caught Brazil by surprise and provoked much negative commentary. Even many Brazilians not prone to accept the wild-eyed theories of U.S. intentions to invade the Amazon suspect that the announcement, coming as it did on the heels of the announcement that Brazil had discovered more oil off the Brazilian coast, could not have been a coincidence."
For insight into how the truly imperialist set in the United States views Brazil, check out George Friedman's recent book entitled The Next Decade. Friedman, the founder of a think tank called Stratfor which analyzes "geopolitical intelligence," writes that "there is only one Latin American country with the potential to emerge as a competitor to the United States in its own right, and that is Brazil."
Currently, Friedman says, Brazil is not a power that is "particularly threatening or important to the United States," and "there is minimal economic friction." Eventually, however, Brazil could pose an economic challenge if it developed its air and naval power so as to dominate the Atlantic between its coast and West Africa, "a region not heavily patrolled by the United States." This could lead to "a South Atlantic not only dominated by Brazil but with Brazilian naval forces based on both the Brazilian and the African coasts."
Machiavellian Friedman argues that in the long-term Washington should "maintain balances of power" and to strengthen Argentina as a countervailing force in the region. Sneakily, "the American president must be careful not to show his true intentions in this, and not to rush. A unique program for Argentina could generate a premature Brazilian response, so Brazil should be included in any American program, if it wishes to participate. If necessary, this entire goodwill effort can be presented as an attempt to contain Hugo Chávez in Venezuela. It will cost money, but it will be much cheaper, in every sense, than confronting Brazil in the 2030s or 2040s over control of the South Atlantic."
Judging from WikiLeaks documents, Washington does not believe that Brazil poses a serious regional challenge to its influence. However, it's also clear from the cables that U.S. diplomats in Brasilia are impressed with the South American powerhouse's rise on the world stage. Currently, the United States is fixated on Hugo Chávez but the truth is that Venezuela is dwarfed by its Brazilian neighbor in most every respect. Perhaps, in the next few decades U.S. diplomats will start to seriously consider Machiavellian schemes designed to limit Brazilian power and preserve Washington's "informal empire" in the wider neighborhood.

Nikolas Kozloff is the author of Revolution! South America and the Rise of the New Left (Palgrave, 2008).Visit his website, www.nikolaskozloff.com

Petrobras announces the discovery of a new accumulation of good quality oil (26º API) in the Santos Basin pre-salt reservoirs at a depth of about 5,680 meters.

The discovery was confirmed through oil logging via cable test in the reservoirs located at a depth of about 5,680 meters.

The consortium will continue the activities and investments necessary to assess the deposits discovered in this area as per the Evaluation Plan approved by the National Petroleum Regulator (ANP), the completion of which is expected to take place in April of 2012.