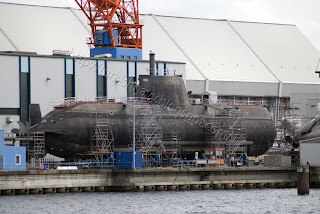 There have been some important and interesting developments regarding the Greek submarine force and the future of it in last few days.

One contract that was cancelled by TKMS was building of 4 Type 214 submarines the other was modernization of 3 Type 209 boats. Both contracts are vital for the Greek Navy.

It is not usual for a company such as TKMS to cancel such contracts. But there is a long story behind it.

So I will try to summarize it:
• 2000: Hellenic Navy ordered 3 Type 214 boats and signed a contract with HDW.
• 2002: A fourth boat was ordered.
• 2002: Hellenic Navy initiated Neptune II Mid-Life Modernization programme. According to this, the first three of the second batch of the Type 209 boats is to be modernized, by cutting them in half and inserting a 6,5m extension to incorporate a fuel-cell based AIP system. Additionally flank array sonar, modern fire control system, electro-optic mast, SATCOM and sub Harpoon firing capability is to be fitted. HDW is the main contractor.
• 2004: First Type 214 ever built was launched as HS Papanikolis in Kiel.
• 2006: Acceptance test of HS Papanikolis conducted. Hellenic Navy refused to accept HS Papanikolis claiming the boat was not meeting the requirements. Poor performance from the AIP system, problems with the ISUS combat system, poor surface seakeeping in high seas, and hydraulic system issues were among the major flaws reported.
• 2007: Second submarine, first to be built in Hellenic Shipyard, HS Pipinos was launched.
• 2008: HDW carried out renewed acceptance tests to show that they have fixed the problems reported two years ago. And German Ministry of Defence (MoD) has certified HS Papanikolis as seaworthy.
• 2008: Problems between Hellenic Navy and HDW about payment issues started to rise to media.
• February 2009: Two days before HS Okeanos, the first boat to undergo the Neptune II MLM is launched Hellenic Navy cancels the programme and express its wish to order two Type 209 submarines with AIP.
• March 2009: The second Type 214 boat, Pipinos , finalized harbour acceptance trials and was declared ready for sea acceptance trials. But these did not start.
• September 2009: TKMS cancelled Type 214 production and Neptune II contracts.

The ongoing dispute between Greece and TKMS does not look as if it is going to end soon. TKMS claims that outstanding payments on both contracts total EUR524 million (USD775.3 million). This number was around USD600 million back in February 2009. They did not agreed to produce the two Type 209 submarines instead of the Neptune II Progremme either.

Actually TKMS does not produce any Type 209 submarines with AIP. TKMS is building two AIP submarines for Portuguese Navy. These submarines are in essence Type 214’s., but called as Type 209’s for political reasons. Thus Hellenic Navy ordered two Type 214 submarines instead of old Type 209’s. But on the other hand Hellenic Navy refuses to accept the first Type 214 into service stating deficiency, which TKMS claims to be rectified. And TKMS delays the acceptance test of the remaining Type 214’s. Thus both sides are creating a vicious circle.

The cancelations of the contracts by TKMS may be seen as an act of breaking the stalemate in the negotiations. It may also an act to built pressure to the coming Greek Government. The general elections are scheduled for 4th October in Greece. If TKMS really cancels the contracts and does not delivers the Type 214’s submarines, that would leave the navy with eight Type 209’s aged between 29 and 38 years old, all but one of them in urgent need of modernization or replacement. This would make the new government look bad.

Turkey ordered 6 Type 214 submarines. If TKMS doesn’t delivers the submarines the Turkey would gain a definitive supremacy in submarine force in the Aegean may be before the next general elections. This also would make the Greek government look bad.

Greece cannot have its submarine force decay while the government and TKMS negotiate over the problems. They have already lost years. Therefore I strongly believe that there will be some kind of a settlement probably in December or in the first months of the 2010.

I also believe that whole Type 214 affair between Greece and TKMS is very closely watched by other shipyards, which may consider, to offer their ships to future projects of Hellenic Navy.
Postado por NOTICIASNAVAIS às 21:21