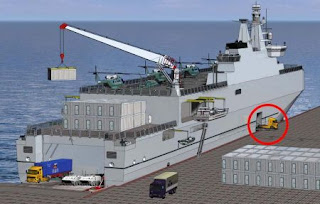 This months issue of Proceedings is the annual Marine Corps issue, and if you read it you might have noticed that it fails to discuss Sea Basing. Does it strike anyone else as odd that since the official design of the 14 (+1) ship Sea Base solution was proposed, there hasn't been a single article discussing the $14-$18 billion dollar Sea Base solution? It seems kind of strange to me, particularly when compared to all the ink dedicated to every other program, or hell, the 5,000 words every month given to any reporter working for a certain Baltimore Newspaper.

I would have assumed the Sea Base, the reason the Marines are losing a full MEB worth of amphibious ships, would have been worth at least 500 words by now in the nations Premier Independent Forum on National Defense, but I guess not. If there wasn't so much money involved, I'd say its a program on the chopping block. 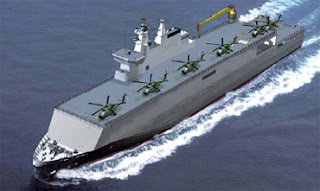 It should be chopped though. Included in this months issue is your physical copy of the new Maritime Strategy, where indeed the idea of using the Sea as Base is discussed at length. Given this emphasis on globally distributed sustainment of mission-tailored forces, it has me thinking perhaps the Navy doesn't need a Sea Base per se, rather a series of Forward Operating Bases at Sea.

I thought about the concept of Forward Operating Bases at Sea when I was going through a brochure from ThyssenKrupp Marine Systems called "Emerging Maritime Concepts in Southern Africa.“ Basically it is a giant sales pitch for the South African amphibious ship proposal previously discussed. 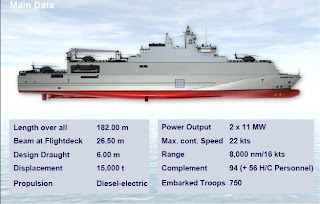 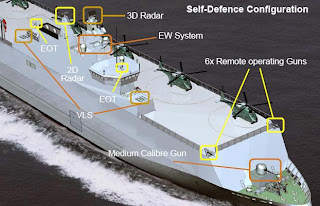 While the ThyssenKrupp design is tilted more for amphibious operations, it raises the question whether this type of platform would make a good mothership for supporting littoral operations, something of a tender/command ship for the LCS and other smaller deployable craft, or perhaps the HVU for the previously mentioned Littoral Strike Group.

Food for thought. These ships strike me as very versatile, but most impressive thing about the ThyssenKrupp design... It appears to be well armed.

Either way, this is a very interesting design in the LHD competition for South Africa, certainly one worth keeping an eye on.