A Call For New Platforms To Fill the Gaps 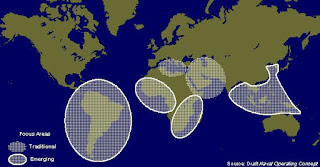 Did I mention I am very pleased with this months publication of Proceedings? Yep, and I'll say it again, this months publication is excellent. I don't know what compelled Lieutenant James Rushton to pen this article, but I for one congratulate him for doing so. In this excellent article, tucked away for members only, Lieutenant Rushton channels Thomas Barnett and Andrew Krepinevich to echo a call made by CDR Salamander only last month.

The article, Fill the Middle Gap Rediscover the Corvette, marks the first article in Proceedings that advocates change based on the evolving lessons of this century and reflects precisely the new Maritime Strategy.

The U.S. Navy needs a new force structure for the new century's challenges. This force should include ships that are inexpensive enough to be plentiful, and robust enough to operate for prolonged periods in inhospitable environments far from the mainstream of U.S. Navy support. Our commanders must be able to commit these ships without reluctance to dangerous waters among the dhows, junks, and oil platforms in shallow seas. In short, we need a small warship that can self-deploy to (and stay in!) areas like the Horn of Africa, South East Asia, and the Gulf of Guinea.

First the author goes back to history in search of guidance moving forward.

Today the U.S. Navy finds itself in a position similar to that of the 1815 Royal Navy. No legitimate competitor challenges us for control of the seas, yet in many ways the world is a far more dangerous place than it was when the Berlin Wall fell.

This is a very similar point this blog made back in August. After doing some research at that time, I kept running into statements and testimony made by Bob Work for a concept he credited to Andrew Krepinevich known as "the strategy of the second move." As we detailed, the period following the War of 1812 for the Royal Navy represents the best historical example regarding the position the US Navy finds itself in today. It should be pointed out, and Lieutenant Rushton does point out, that while the time is known for colonial rule, the Royal Navy did a lot of good ranging from suppressing disorder in remote locations, almost completely eliminating the slave trade by themselves, projected British influence and interests around the world, and served as a instrument for peace as a deterrent for war.

The image of a 10,000-ton, billion-dollar cruiser being used to defend Iraqi oil platforms in painfully shallow and congested waters points to the limits of what can be done to reconfigure our existing Navy. The CNO's new maritime strategy acknowledges that preventing wars is as important as winning wars, and that new challenges face our traditional naval force structure beyond sea control and power projection: irregular, catastrophic, and disruptive threats emanating from terrorism, proliferation of weapons of mass destruction, and disruption of the sea-borne economic lifelines that gird the globe.

To counter these threats, naval forces must operate in and around what Thomas Barnett calls the "non integrating gaps" in the world politico-economic structure. While traditional warships and the LCS can contribute much to stability and counter-proliferation operations, a more continuous and intimate presence is required than what can be achieved with a Navy composed solely of these capable—and expensive—assets.

For Christmas this year I bought each member of my team three books. The Pentagons New Map, Six Frigates, and Shooter. While I highly recommend all three, I believe The Pentagon's New Map is a prerequisite for understanding some of the ideas on the direction of the Navy and the force structure of the Navy promoted here. The new Maritime Strategy addresses the gaps, and not just with lip service.

The Navy should think clearly about how to approach the unique problems associated with the "non integrating gaps" and in doing so, recognize the metrics are dissimilar enough to require special attention, but flexible enough to scale all the way up to major war. This is why a common hull strategy for a larger fleet may be the way ahead, particular if the Navy eventually finds modular payloads both affordable and desirable. That is why when this blog advocates Corvettes and Motherships, we advocate based on the LCS hull and the LPD-17 hull.

Lieutenant Rushton goes on to make his case for the Corvette as the solution for the middle gap the Navy is looking to fill. In doing so he goes on to cite one of my favorite quotes.

Rushton cites Mullen in the article, but many have said it. Is the Corvette the answer to presence at the table of "non integrating gaps" problem? CDR Salamander would be happy, he has laid out at least a dozen good reasons why Corvettes make a lot of sense for the US Navy over the years, reasons that range from improving the officer corp to meeting the mission profile.

We tend to agree with Lt. Rushton as well, at least mostly. We think the Corvette is part of the solution, but we still believe the Navy needs a series of platforms that meet these irregular challenges to address both the high end and low end of warfare. We have called such a system the "Littoral Strike Group" in the past, but buzwords mean nothing, what we would prefer to see is a larger collection of concepts as part of a unified strategy to address the challenges, and integrate from the ground up a working relationship with other partners (both governmental and nongovernmental) that will be required to truly meet the requirements, with the Navy as the key enabler. Credit Lieutenant Rushton though for bringing up the subject, observing the need, and putting together an excellent article that highlights not only the historical view, but the strategic vision of today as well.
Postado por NOTICIASNAVAIS às 11:19