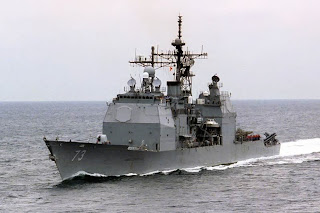 In the early hours of the morning, daylight hours of the morning, they were encountered by five total small high-speed craft that we assessed to belong the Iranian Revolutionary Guard navy. The five boats approached the formation on the formation's starboard bow in international waters slightly inside the gulf from the apex of the strait, broke into two groups, one to one side of the formation, one to the other. The groups maneuvered aggressively in the direction of the U.S. ships. They were called on radio; they were -- ships' whistles were sounded, those sorts of things, to draw attention to the fact that their maneuvers were a cause of concern to the commanding officers.

At one point during this encounter, we received a radio -- the ships received a radio call that was threatening in nature, to the effect that they were closing our ships and that the ships might -- the ships would explode, the U.S. ships would explode. Subsequently, two of these boats were observed dropping objects in the water, generally in the path of the final ship in the formation, the USS Ingraham. These objects were white box-like objects that floated, and obviously the ship passed by them safely.

The encounter continued, with the boats maneuvering close to stern and after -- under 30 minutes total, they returned in the direction from whence they came, to the north, back towards Iranian territorial waters.

He goes on to answer several questions. Some of the details discovered from his answers. I admit, some of this is redundant, but all of it is relevant.

1) This group had passed an Iranian navy ship earlier in its transit and exchanged quite correct radio communication with that Iranian ship, and indeed had communicated again correctly with some Iranian shore stations.

2) Radio calls were made from the U.S. warships. They were not heeded.

3) It was their judgment in the totality of the information they had in the situation, that warning shots were not necessary.

4) I take this incredibly seriously and I expect that commanding officers will successfully defend their ships and their crews at all times in this theater. It's important to remember we have been attacked by small high-speed boats in the Gulf, in the region -- the Cole -- and in the northern Gulf a few years ago. We have suffered casualties, and we take this deadly seriously.

5) The transit began about, as I recall, an hour and half to two hours before outside the Gulf, and they proceeded in through the Strait of Hormuz, had already headed westward after the apex of the Gulf -- of the Strait. This occurred just about 0800, 8 A.M. local time, and lasted for less than 30 minutes.

6) [The IRGC Boats had] Neither anti-ship missiles nor torpedoes, and I wouldn't characterize the posture of the U.S. 5th Fleet as afraid of these ships or these three U.S. ships afraid of these small boats.... That said, we take the potential for a small craft to inflict damage against a larger ship seriously, and we would be irresponsible if we didn't.

A few thoughts. The Iranian reaction is nonsense, it reminds me of the kind of nonsense we saw from the IRGC and Iran during the tanker wars in the 1980s. I was a bit disappointed that when Vice Adm. Cosgriff talked about historical cases of these type of encounters with high speed boats, he choose to mention the attack against the Iraqi oil terminals and the USS Cole bombing incident. Unlike the Iranians, we have a short view of history.

These types of encounters with Iran were not just uncommon, but very common in 1987 and 1988. Commercial mariners despised one ship in particular during the tanker wars, the Sabalan, whose captain was considered the biggest thug on the high seas. At least a half dozen US Navy ships during that time period recorded an incident of a mock attack against it by the Sabalan.

If you go back and review the tactical objectives of Operation Preying Mantis, the decision to provoke Iran by attacking two oil rigs supporting operations for the IRGC small boat squadrons was specifically designed to sink a single warship, and in the minds of everyone at that time the warship everyone wanted to sink was the Sabalan. It was in fact the sinking of her sister ship, the Sahand, that ended that naval action.

Why is it important to use historical incidents with Iran in context with this incident? Because even a casual review of the history of the tanker war reveals that the lack of a response, either by public embarrassment or by means of force, led to another, escalated act of aggression, and usually it didn't take long for the next 'incident.' When force is used, Iran always responded with force.

However, there were effective means for preventing a response from Iran during the tanker wars. Whenever Iran was discredited in world public opinion, internal domestic political problems would restrain a violent reaction. If the US does not take this opportunity to publicly establish a credible position over this incident in the court of public opinion, it is accurate to say that history speaks to escalation.

If the war is being fought in the headlines, which many assume is a part of this incident drawing associations between the President's visit to the region, the nuclear issue, or the Iraq issue... then the US needs to be serious about the importance of competing in that public battleground. Otherwise, it will be other battlegrounds where Iran will continue to grab more victories in the battleground of headlines.

We are the ones calling Iran terrorists, it would be nice if this administration would stand up for the country in the battleground of world public opinion for a change. For example, we don't consider these types of inconsistent, incoherent policy statements standing up for American interests, in fact I'm not even sure what the hell that is.

Many are accurately pointing to the dangerous consequences that could have occurred had the US Navy given the IRGC small boat operators a swimming lesson with a wall of steel. It is too bad no one is highlighting the real danger of not establishing the credibility of the US by highlighting, proving the dangerous behavior of the IRGC boats, and in particular their statements. Historically speaking, ignoring the public discussion with Iran or simply addressing their actions with a hard line of rhetoric has failed to discourage more bad behavior. Such a response now would amount to turning a successful, professionally handled publicly discussed international incident by the Navy into a strategic draw because our political leadership is too weak to capitalize on the political victory available.
Postado por NOTICIASNAVAIS às 21:43