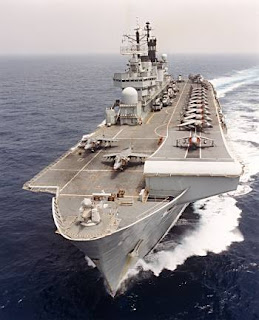 A FAULTY meat fridge is forcing a Royal Navy aircraft carrier to return to base today just two days after setting off for the Indian Ocean.

HMS Illustrious departed from Portsmouth Naval Base on Monday to head the multi-national Task Group Orion 08 which will be carrying out exercises and diplomatic visits during the next four months in the Indian Ocean and Mediterranean.

Navy spokesman Anton Hanney said a refrigeration unit used to store meat on the warship had been found to be in danger of breaking down.

He explained: "She has a minor problem with her refrigeration unit. It hasn't broken down but because she is off the south coast, the sensible thing is for her to come in and get that fixed before she goes off again.

"It wouldn't be prudent for her to go off with the chance of the unit breaking down while she was in warmer climates and then engineers would have to be flown out to her to fix it.

"It will not delay her programme in any significant way, she will be able to make up 24 hours without a problem."

It is of coarse a completely understandable course of action, prudent even, but perhaps the best phrase is 'penny wise.' In a way, that phrase defines the Royal Navy today, dominated by a bean counter political culture comfortable reducing the image of the nations most historical national institution, and yes the Royal Navy ranks well above the monarchy only the tabloids pay any attention to outside Britain these days.

The Royal Navy is better than this, the most powerful vessel of the Royal Navy shouldn't need to turn home 2 days after deployment because a refrigeration unit might break, but it is a sign of the time. It amazes me the institution that almost single handedly ended slavery on planet earth would have so much difficulty repairing a refrigerator on its largest warship while on a deployment, that she would need to go back to port
Postado por NOTICIASNAVAIS às 09:51