Another Expert Calls For the Corvette 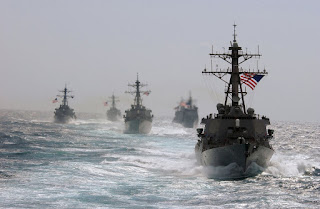 It is our favorite time of the month, that time when Milan Vego writes an article in the Armed Forces Journal that challenges the conventional wisdom of some naval topic, puts forth a historical view with a modern alternative, and discusses conditions and options. This time around Milan Vego advises it is time to Think Small: Adding small combatant ships would beef up the Navy’s capabilities and the article is top quality.

The article is the combination of advocacy for small combatants, an indictment of the Littoral Combat Ship, and a counterargument to the conventional wisdom bias against small combatants inside the blue Navy. We address those three points in reverse order, starting by countering the argument that small combatants are somehow expendable and irrelevant in the maritime domain.

Perhaps the Navy has felt that if such a force were needed, it could quickly create one. It did this in World War II when, within a short time, some 426 patrol torpedo boats were built, organized and deployed in the most distant war zones. Only 42 of these PT boats were lost to enemy action. Modern small surface combatants are technologically sophisticated and relatively expensive, however. They cannot be built quickly once the conflict at sea starts. There is also the unfounded belief that small surface combatants are of little use in the modern era. Although that might have been true in the past, it is not the case today. Modern multipurpose corvettes and missile combat craft carry weapons and sensors and are fully capable of conducting a wide range of combat and non-combat missions.

The combination of "technologically sophisticated" and "relatively expensive" are two points we have been taking a hard look at lately. There is an idea out there that small surface combatants are going to 'inexpensive' thus able to build up rapidly. That hasn't been true of small surface combatants in any country for several decades. The value of modularity is key here, even if a payload swap consists solely of changing an 11 meter RHIB for a 11 meter Protector USV, the ability to interchange is important. This would allow a small combatant to quickly transition from a VBSS security operation to a ASW operation or armed unmanned vehicle force protection operation against small attack craft.

More to the point, while this capability could probably be achieved through a reproduction of something like the old Asheville class, the Navy would want a new Asheville class designed from the keep up, taking advantages of the evolution in technology in shipbuilding over the last 4 decades since the Asheville was originally designed. Furthermore introduction of a small combatant suitable to challenge the 21st century littoral threats requires a total strategic approach, including operational concept of operations with command and control, logistical support, and sustainment considerations. In other words, it needs to be better thought out than the existing Littoral Combat Ship concept.

Speaking of the Littoral Combat Ship, Milan Vego represents our own position very well with these comments. As we have stated many times, often to a bit of criticism, build a few, but recognize the platform isn't perfect, represents a blue water platform for a green water mission profile, and is clearly not the solution.

The LCS is not really a littoral vessel but, rather, an ocean-going platform. Its draft of 20 feet is too large for maneuverability in the confined waters of a typical narrow sea such as the Persian Gulf. Its sprint speed is generally of little use around islands/islets and in shallow water. It is highly doubtful that a ship of 3,500 tons, no matter how well-armed and -equipped, could match the agility of hostile small boats, and suicide boats in particular. Another shortcoming of the LCS is that it has to move outside the littoral for refueling and rearming.

That last point is a bit confusing without consideration. Without a dedicated tender capable of operating in the littoral itself, the suggestion intended is that the MSC ships that will be required to refuel and rearm will be out in blue water. This is exactly where our concept of a mothership for smaller platforms comes into play, and why we see such a platform to be the flat bottom shallow draft existing LSDs with 21ft draft or new LPD-17s with its 23ft draft.

The first point is important though. The Littoral Combat Ship really is an optimal platform for a blue water platform to move closer in shore within the framework of an existing Carrier Strike Group or Expeditionary Strike Group. The LCS doesn't have the firepower to operate independent, and indeed all the off board systems are intended to be unloaded into the littoral by the LCS while the ship moves back out to blue water, and uses unmanned systems as a relay to teh unmanned systems reporting inshore. This is blue water thinking about the littoral in its zenith, and will be reflected as such by historians.

Milan Vego goes on to recommend existing options, both foreign and domestic as alternatives. We only consider one of the foreign alternatives as realistic, and that platform gets a good writeup in this piece. 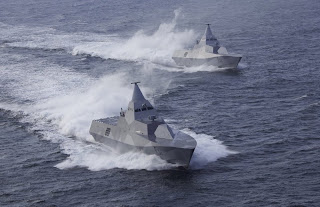 The fiber-reinforced plastic construction is usually the turn off for this platform by many, to us it is the appeal. The materials for construction are much easier obtained and purchased in large quantities than that of aluminum or steel. We always refer back to this outstanding PDF when considering the options for the Visby class, highlighting they come in more than the existing size.

We don't claim to have the right answer, and appreciate the approach of Milan Vego to highlight a range of alternatives. We maintain a firm belief that the way ahead for realignment of resources to the new maritime strategy is to cancel the DDG-1000 after two hulls, concentrate on the CG(X) and DDG(X) replacements, and fill out the rest of the force with a formidable amphibious force of at least 19 LPD-17s for the 9 ESGs, transition the existing LSDs to primarily Navy use, and build surface combatants between 500 and 1500 tons in large quantities.

However the challenge of small surface combatants isn't building them, it is sustaining them in forward theaters and keeping them relevant in the conditions of war and peace. It is also why we start with the high value unit, the mothership that bridges the sea with land and littoral in between, rather than the small combatant, because by embracing the high value unit mission profile all the possible mission profiles for small combatants become self evident.
Postado por NOTICIASNAVAIS às 09:34