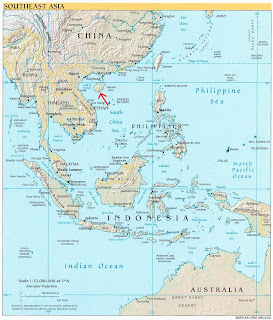 The news coverage of the PLAN over the last two weeks has been observing new satellite imagery of a submarine base at the South Fleet Naval Station near Sanya, on Hainan Island off China's southern coast. Media reporting on the subject has been a bit hollywood, with one report describing the base as a "vast, James Bond-style edifice capable of concealing up to 20 nuclear-powered submarines, which will enable China to project its power across the region." We find that kind of analysis ridiculous.

Janes broke the story back on April 21st with some imagery and analysis. The best analysis we have seen to date comes from the FAS Strategic Security Blog on April 24th, which provides excellent imagery of the base. The FAS blog reports the imagery was taken by the QuickBird satellite on February 27, 2008. When looking for analysis of this topic, we found the FAS blog most appealing, because they immediately focused in on the aspect of the base that we believe is most important. China appears to have a new new demagnetization facility. From FAS:

There are a number of benchmarks one can follow to determine the technology evolution taking place with PLAN submarines, and we have seen two such benchmarks met over the last few years that imply significant improvement. The first technology was side panel sonar systems that have been observed on some Song class submarines and all the Yuan class submarines to date, and the demagnetization facility represents a second benchmark. With these two benchmarks we can imply that China has evolved their power systems on their conventionally powered submarines, probably incorporating Sterling AIP propulsion, but additionally have begun committing resources to the 'external' expensive technologies like a demagnetization facility required to reduce the signature of their submarine forces.

The FAS log also discusses the Underground facilities that have drawn most of the attention.

The base has extensive underground facilities. The most obvious is a large portal over a sea-entrance to what is probably an underground facility. The entrance appears to be approximately 3 meters (15 feet) wider than a similar entrance at the Northern Fleet Jianggezhuang Naval Base (see Figure 3 for comparison).

Unlike the media, we are less impressed with the underground submarine facilities. In our opinion, this creates a tactical nightmare for China and probably isn't as large as the media reporting implies. We also question the cost benefit of housing submarines inside this facility. Clearly we don't see any advantage during wartime, it hardly makes sense to store submarines inside a rock that is one heavy bomb away from having a blocked entrance. Additionally, the cost is likely pretty high for a peacetime role of hiding submarines from satellite imagery. It is possible the facility acts as some sort of submarine dry dock or provisioning location, which could be useful for concealing submarine improvements or deployments, but for the most part China does a pretty fair job of concealing military activities anyway.

The base itself, built into a mountain, makes a lot of sense from a hardening perspective for command and control of the South Fleet. If the base itself is compartmentalized it would be very difficult, even for deep penetration weapons, to neutralize the base without numerous strikes. The satellite imagery highlights the vast size of the naval base with plenty of room to support naval forces, and with good accessibility to the South China Sea, offers China a very suitable strategic location for blue water naval forces.

We expect to see not only the nuclear submarine forces, but also heavy surface fleet assets to be stationed at this base over time. Strategically, it is the most difficult base to attack simply due to range from air bases in Japan, South Korea, Taiwan, or Guam. It makes more strategic sense to put valuable assets further away from where potential adversaries could strike when the same location is closer to the most important sea lines of communication.
Postado por NOTICIASNAVAIS às 20:02