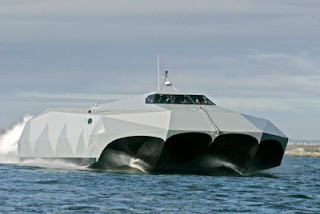 I'm thinking the Green Water Navy discussion yesterday got off track a bit, but like champs a few commenter's laid down the wood and reset the discussion on the right track. Well done.

The 100 ft metric discussed in the ISN article discussed brought to mind a concept introduced in 2005 as part of the Congressionally mandated Analysis of Alternatives for Fleet Constitution mandated by Congress. Because we all know the Navy would demand a platform be built from scratch, that using an existing platform would simply not happen, we think perhaps this idea would scale very nicely into the technology set and desired requirements for a green water platform.

If the VSC-100 platform was designed to from a Global Fleet Stations host ship, we think this is exactly the type of thing that makes sense for addressing the green water requirements for peacetime operations. Keep in mind, the Navy finds itself in a period of fiscal competition, so any budget resources committed to a peacetime platform must find usefulness in a wartime scenario to justify investment. With weapon centric modular payloads as a core design factor, the Very Small Surface Combatant (VSC-100) does exactly that.

One other thought. We have linked that OFT report twice tonight. I've been thinking about some commentary regarding Admiral Cebrowski's ideas that highlights just how tuned in his concepts were to the time we were in. From Thomas Barnett:

Cebrowski pushed my work, to include the SysAdmin stuff, like crazy throughout the bureaucracy as early as 2002--eventually right up to Rumsfeld himself. I briefed all of Rummy's senior aides, as I describe in PNM, in the summer of 2002.

Tell me, how can Art be a champion of both NCW and SysAdmin stuff at the same time?

Dr. Barnett reminds us that the ideas that Streetfighter is associated with are far more complex than the criticism allowed. The Navy was very resistant to the version of change introduced by the ideas being floated in the late 90s, but that a two star Admiral is talking about building 100 ft ships for green water operations to support Global Fleet Stations today is a sign that change does happen, but at a snails pace.

Regardless, it is very difficult to read that OFT report and not recognize that those ideas in 2005 had evolved in line with the requirements of today. The revolt led by Admiral Cebrowski, Captain Hughes, Thomas Barnett, and many others continues to prove that the ideas really were todays solution. Ask yourself a question: Would the Navy be better off today had it built a bunch of Streetfighters instead of the LCS and DDG-1000s over the last few years? We think so, but we also ask ourselves this question.

If the Navy builds a bunch of 100 ft green water boats instead of 5 DDG-1000s will we find ourselves wishing we had the 5 battleships a decade from now?

We think it depends, if 50 Very Small Surface Combatants (VSC-100) at $100 million per and with modules are produced instead (essentially 50 VSC-100s for the cost of two DDG-1000s), I think the Navy gains more with the numbers.
Postado por NOTICIASNAVAIS às 16:18